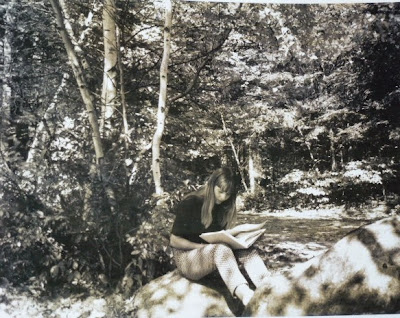 I`ve started playing Solitaire again. The kind with a real deck of cards that you have to shuffle by hand. I play on the dining room table. When the cats let me.

I hadn`t played since I was a teenager. Once my homework done, and if what my parents watched on TV did not interest me, I would play Solitaire for hours on end on their dining room table, listening to the rock and roll hits of the Dave Boxer show on CJAD, signing along to the love songs.

While the cards went slap slap slap on the tablecloth, I dreamed of my first boyfriend, and yearned for those summer days spent necking while listening to the Beatles on the portable record player. He was the only boy I really enjoyed making out with.

For my father, seeing that I was smitten, forced me to go out with other local boys. But none compared to that soft, tender touch, those blue eyes looking back at me. Only with him did I feel secure enough to be myself. With him, I felt I could do no harm. In his arms, the world was a good place to be in.

But once summer vacation was over, he went back to the big city. Living a life completely different from my own, I thought. Did he think about me then? Was he as fond of me as I was of him? Or was I just a summer fling, convenient time out from school and city life? Those are the questions I was asking myself at the time...

All these memories come flooding back now while the playing cards go slap slap slap on the tablecloth, some 50 years later. Some say they would give anyting to be young again. Not me. For me, being a teenager was a very lonely, frustrating time.

For my parents had the very strict way of thinking that girls did not call boys they were interested in. A young lady had to wait for the phone to ring, playing hard to get.

And he never called.
Posted by Amie du Richelieu at 2:35 PM No comments:

The Power of the State 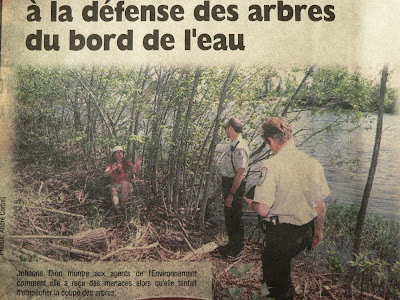 Above: from the cover page of local newspaper

"When you encounter the implacable power of the state it`s a deeply destabilising moment. In an ordinary life it happens very rarely - maybe never, maybe once or twice, but your individual being, your individual nature, seems suddenly worth nothing - you feel expendable - and that`s what frightens you, fundamentally, that`s what makes your bowels loosen." - William Bayo, Sweet Caress
Posted by Amie du Richelieu at 2:39 PM No comments: