The Kiss of Death

During the early 80s, thanks to a job agency, I had found a temporary job that I liked at an international company in downtown Montreal. For a couple of years, when the company needed extra staff at their dispatch center, they would give me a call for me to come in to work.

It was a challenging job where I would meet interesting people. I would answer phone calls from customers needing servicing on their computers and calls from technicians calling in to update their workload schedule. It was a paperless office. Everyting was done on computers.

Sometimes technicians would be called in to work at dispatch, but it was not considered a promotion, far from it. Most temporary dispatchers were women like me, but most of them were younger than I.

At some point, a technician was called in from his work on the road to work with us at dispatch. Of course, he already knew all of us, and made a big show of greeting us all when he came in to work in the morning. And he liked to walk around the room and kiss the ladies while saying good morning. Most of us were too embarassed to say anything at first, saying good morning back, but very soon I feigned being on the phone the moment I saw him come in and would brush him off while talking on the phone when came my turn to be kissed. I noticed some other female employees did not appreciate the special attention he gave them, and soon complained to me when we met in the bathroom.

And so I decided to go see our boss in his office, door closed. When I told him of the embarassing behavior, he assured me that he had not noticed anything, although that was hard to believe because his office had clear glass walls.

Soon after, H.R. called me up in his office and asked me to explain the behavior I found embarassing, and asked me to name the other employees who werer inconvenienced by that behavior.

I finished my employment time that year, and even though my ex-boss asked me to re-apply for the job the year after that, they never re-employed me, although the other younger employees were called back to work in dispatch. I was disappointed, but not surprised.
Posted by Amie du Richelieu at 3:11 PM No comments:

When Men Tell Women What To Wear 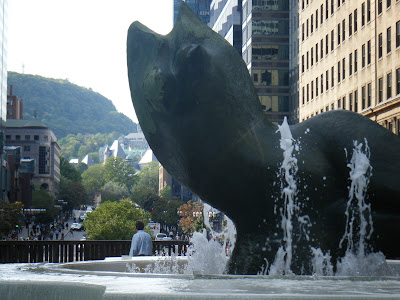 Back in the early-mid 80s, I was looking for a job. I had just worked 10 years for Bell Canada, and 3 1/2 years for IBM, both in downtown Montreal, both multicultural-bilingual workplaces.

A job agency had found me a temporary part-time job at a Quebec-based very well known company as a receptionnist-mail-clerk, again in downtown Montreal. A few employees there were from English speaking descent, most were bilingual, but a few were French-speaking only Quebecers, in all about 70 employees in a sky-rise office that would be my co-workers.

It was Fall, and I had a collection of tweed, wool and cord skirt and jacket ensembles to wear with tailored blouses, vests, matching wool kneesocks and leather penny loafers, a very British-European look for Autumn.

A few weeks after being told that they would keep me as a permanent employee, my immediate boss, the head Accountant, called me in his office early one morning. His own boss, a very English speaking Controller, was out of town on business, so I wondered what my own boss wanted.

After making me sit in his office and closing the door behing me, he explained that the way I dressed was not acceptable. I would have to buy some dresses and hose and high-heels, and had 2 weeks to do so or I would be fired.

I was so stunned, I could barely believe what he was saying. He made me repeat what he just said, and sent me back to my post. I had to assume he was serious.

Still in shock, I felt I had to talk about this with somebody, and the person I could most relate with and considered a friend was the President`s secretary (personal assistant), so when she came to pick up her mail, I asked her if I could talk to her some time during the day. Seeing how upset I was, she made me come to her desk during my coffee break.

At her desk, I told her what just happened, and was still in shock and I cried. She asked me if it was true that I had laughed at my boss. I said that I may have had a frozen smile on my face only because I could barely believe what he was saying. I told her that even if I wanted to, there was no way I had the money to spend on a whole new wardrobe in 2 weeks, and could not walk with high-heels, not being used to them. She told me not to worry and to go back at my desk.

When the Controller came back, he came to see me and told me not to mind what my boss had told me a few days earlier and assured me that I told the right person about it.

Soon, my boss was transferred to a plant in Ontario, where I was told the worst of working conditions of our company were to be found there. I could hardly see my boss there as he could barely say hello in English even if he wanted to.

A few years later, somebody quietly told me that my ex-boss who did not like my knee-socks and flat-heeled shoes had commited suicide. I did not have it in my heart to rejoice at the news.
Posted by Amie du Richelieu at 2:50 PM No comments: