Beams: What They Mean To Me 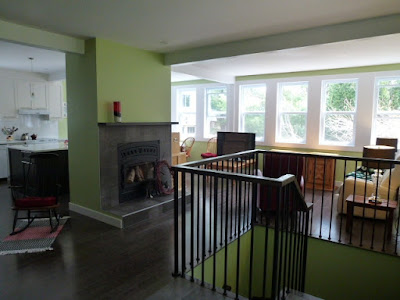 I bought the house already tattered and tired. I knew it would require a lot of work to make it nice and tidy, but I was young and had all kinds of plans.

For the main space, for example, I wanted the walls that made the hallway, the living room, the kitchen and the closed-in porch all to come down. Big beams would replace them to hold up the not quite finished second floor.

And so the walls started coming down: only a few 2 X 3s were left standing until the beams could be lifted up in their place. The longest beam was to be 26 feet long, so how to make sure it could be brought inside the house and be able to close the front door afterwards?

The only way to make sure was to do a dry run in a smaller scale. I drew the main floor plan down to scale, the 2 by 3s became pins, and the longest beam, the one I was the most worried about, became a length of plastic straw, cut down to scale.

It became clear that in order to bring the 26 foot beam inside the house, the electric range would have to be removed from its cubby between the lower kinchen cabinets so that the front end of the beam could be pushed into that opening. Then the other end of the beam could be swung in front of the bedroom door opening. But it was going to be very tight, and so the bedroom door would have to be removed, and the dresser behing it moved out of the way also.

This way the beam could be backed up in the bedroom, and the other end of the beam then could be swung back into the main room, out of the range`s location and pointing towards the opposite corner of the house. Then the other end of the beam would come out of the bedroom into the main space, and it now would be just a question of pushing the beam under its permanent location thanks to lenghts of pipes and round pieces of firewood to roll it on the floor.

And so I was ready on delivery day, but the delivery men who came to check the place out were not so sure, but after convincing them that I had made all the measurements, they reluctantly brought in the 26 footer.

Sure enough, everything went as planned. And some 25 years later, the beams became an integral part of the design when that space was finally finished.

Looking up at my beams I am reminded that with a lot of determination, the right tools and serious planning, I can achieve anything I really want to!
Posted by Amie du Richelieu at 2:37 PM No comments: 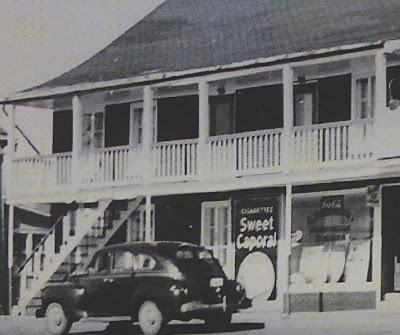 Another Richelieu landmark was brought down to rubble this morning. The two story house on Richelieu`s main thoroughfare belonged to a family who lived upstairs and whose father kept a truck-stop kind of restaurant where one could have his home-cooked meals, buy a newspaper, candy or gum and cigarettes while listening to the jukebox, center of attention to the local teenagers.

When I was a child, on hot Sunday summer afternoons, my father would bring us there to have an ice-cream cone. My father also bought his Montreal Star newspaper there, and sent me there Saturdays to pick up his copy put aside for him. That is the only time my father wanted me there: he strictly forbade me to buy candy, gum, or hang out with the gang listening to the latest hits of that rock and roll he did not care too much about.

The owner of the restaurant had a daughter about my age who went to the same school as I did, but she was much more popular than I was, of course, her having a juke-box and restaurant and all. I was never really accepted by her or her friends because I was not allowed to hang around in the restaurant. I did not mind that too much, because I much preferred to spend my time by the river or in the surrounding fields rather than stay cooped up in a smelly restaurant all afternoon. Because, of course, everybody smoked in there, and me and my parents did not.

When the father/owner of the place got too old to stay in business, the place tried to survive as a breakfast truck-stop, then a dairy bar during the summer months, but the locals simply did not go there any more, and truck traffic was now mostly on the Eastern Township Highway, a couple of kms upriver. So Mr Morisset had it good while it was going. It was never the same again after he left.

And now the building is demolished....
Posted by Amie du Richelieu at 2:44 PM No comments: 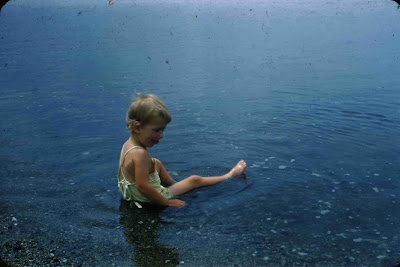 "Young man, nature is not frightening, it`s people who are frightening! You just need to get to know nature and it will become friendly. This creature known as man is of course highly intelligent, he`s capable of manufacturing almost anything from rumours to test-tube babies and yet he destroys two to three species every day. This is the absurdity of man." - Gao Xingjian, Soul Mountain
Posted by Amie du Richelieu at 2:38 PM No comments: