The distant sound of water flowing over the dam 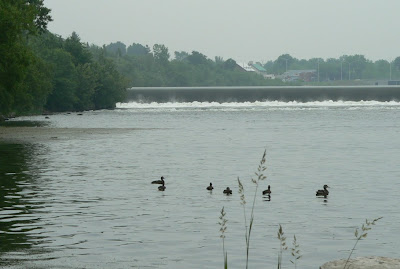 "Before she closed the door behind her, Jane turned for one last look at the river. The eternal promise of spring hung in the air and the rain that fell seemed perfumed with it - almost the smell of green itself.

Closing the door, she heard- before it shut - the distant sound of the water flowing over the dam, and she closed her eyes to watch the river in her mind, flowing downstream to continue its everlasting journey towards open water, open skies and the promise everywhere of life. " - Timothy Findley, Spadework
Posted by Amie du Richelieu at 3:08 PM No comments: "And if you owned your own house - had taken up residence elsewhere - at whatever distance you could achieve - then you were safe. No more clawing fingers - no more cloying demands. Freedom. Freedom from the dead weight of the past." - Timothy Findlay, Spadework

It was in the middle of winter. A Friday or Saturday evening. I must have been 18-19 or 20 years old. About the time I would go find work for a while to pay for going back to CEGEP. Just trying to get a DEC certificate - in anything!

My father had made a fire in the fireplace, prepared drinks for my mother and himself, and they were sitting face to face each side of the fire. Soft background music was playing.

I had taken a shower in the awful shower stall my father had built in the basement, and realized I had to cut my toenails. So still in pajamas and robe, I sat on the floor in front of the fire and cut my nails, throwing the cuttings in the fire.

I don`t recall the exact words my father used, but he wanted me to do the job elsewhere. He did not keep the house very warm, and the central furnace thermostat was in that room with the fireplace, so I did not particularly want to be elsewhere right now.

But it occured to me that I was not wanted. And the house I considered was my home clearly wasn`t. Not really.

That gave me an awful feeling in the pit of my stomach. To feel unwanted. And homeless. I never felt so bad in all my life. And promised myself I would do ANYTHING to not feel that way ever again.

And so my main goal in life was to become a homeowner. So if nobody wanted me, at least I had a home I could call my own. And nobody could kick me out. Or tell me what to do - or not to do.

I shall add here that when my husband and I first bought the house in 1979, my parents invited us for dinner to celebrate, and after the meal, my father told my husband and I that because my husband had such a "shitty job" (job de trou de cul), my husband and I should not count on my parents to help us pay for the mortgage, or to babysit our children, for that matter. Their years of raising children were over, he said.

I can`t imagine saying that to your only child. But there you are...
Posted by Amie du Richelieu at 2:27 PM No comments: