Progress in the attic 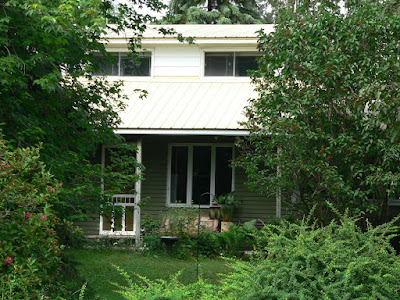 I'm at last able to make sense of the mess that had accumulated in the largest room of my attic. Some call it the "train room", because T was to take the whole room for a model train project. But it never went beyond temporary tracks put down with thumbtacks on a shelf built at eye-level and quickly wired electricity to run the trains.

The room had so much stuff in it that I could barely find a few square inches on the floor to be able to go over and open or close windows. What helped the most was getting rid of a Queen sized mattress bought in 1974 that had ended up there when there was a regular stairway. I could no longer bring it down whole because now the access to the 2d floor is a folding ladder through a hole in the ceiling. So to get rid of the mattress, I had to break it down into pieces that fit the opening.

Once that big item gone, I could better make sense of what was left in the room. I was able to sell a few items during a garage sale this last summer, and I threw out a lot of useless things too. I had strung Christmas lights, the incandescent kind, all around, to brighten things up. Those are now in the basement, because that is where I will be working this winter. So there is now actually a bit of room to go from one end of the room to the other.

The second floor of my home is not heated, so I don't think I will be able to go on working up there soon. At least not at decent room temperature. So I plan to continue next year: I will probably separate things in different piles. Stuff I can sell at the next garage sale next summer in one pile, computer stuff in another, books and records in one corner, boxes full of picture frames and laminated photographs in another. Once that is all done, I will have to tackle the trains.

The boxes for all the locomotives and the railway cars are at the far side of the room when you walk in, but all the contents are spread all around on an eye-level shelf. I will have to sort those first, then try to find the corresponding boxes. But I think that once the room is nicely in order, that task will be much more manageable.

This room is the largest on the second floor, and has two large windows looking over the front of the property and the river. My aim is to eventually empty it so I can put on a fresh coat of paint on the ceiling and the walls, and wash the floor. This has never been done since I bought the property back in 1979. So you can imagine how I am itching to get to work and finally have it finished!
Posted by Amie du Richelieu at 6:14 PM