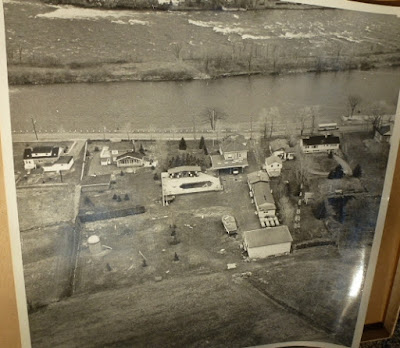 The Panet property in the middle of above photo back in 1976.

Where I grew up, our immediate neighbor was millionaire Henry C. Panet. He had inherited from his rich father, and had a thriving business selling propane gas. He had started his business from home, but the many underground and surface containers holding propane gas under pressure to feed his ever growing fleet of distribution trucks eventually forced him to move the major part of his business in an industrial park in another town. (Four tanks side by side can be seen in above photo between two sheds)

The man was quite a character, and became my father's best friend. He had come to know him, and the existence of the summer cottage availability that he eventually bought, from his younger brother who worked for the same Montreal company as my father did.

When Hydro-Quebec put up for sale the river bank in front of his home, he quickly bought it, for he was very afraid of fire, and wanted a way to have easy access to a lot of water. So every spring, a bulldozer would go on the river bank, level out the area in easy slopes to go down to water level, then the bulldozer would align the big rocks in a long row across that part of the river that was the water outlet of the holding dam for the electric power plant. The big rocks would raise the water level in front of his property, and so would insure a proper source of water to extinguish any fire that could occur. This would quickly become the "Panet Beach" where the people would come and swim during the summer time. I remember that for many years, Panet and my father would repair and build wooden stairs to make the "beach" more accessible, and a dock by the water for those who did not like to sit in the sand he would sometimes have delivered to make the "beach" more inviting. Needless to say, I spent a lot of time there, and that is where I learned to swim. 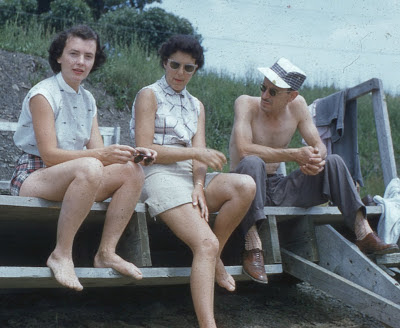 Photo: my mother with friends on the dock by the river.

To go down to the beach, stairs went down right beside 4 big Red Oaks that shaded that part of the shore. Those trees are still there to this day (on the right in this photo): 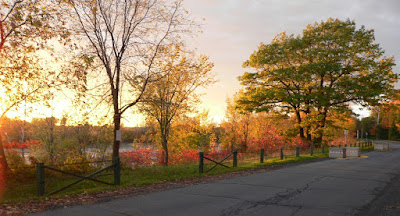 Like my father, Panet had an only daughter, a little older than I am, but when she married a divorced Italian man, his strict catholic upbringing made him frown on this, and so openly said that on his death (in his last years, it was clear that he had a severe heart problem, but would not seek medical help), he would let his wife and daughter enjoy the property, but he would eventually bequeath it to his younger brother and his children.

So his daughter and her husband, and Panet's wife, lived there for awhile after Panet's passing. The husband had a certain way of dealing with the property: everything had to be "clean", and that meant mowing as close to the ground as possible, and trees where considered a hassle. So after the terrible ice storm of 1998, the husband hired a contractor to clean up "the mess" by the riverbank, and that meant cutting down 9 trees out of 10 that had grown on the high water mark. You can read what I did about that in my other posting here: http://lesamisdurichelieu.blogspot.ca/2012/02/riviere-richelieu-cette-manie-de-couper.html

I had verbally, and then physically, tried to stop the cutting of the trees, and received many death threats from that contractor, and my neighbor did very little to protect me. When the game wardens came to check on the damage, my neighbor came to tell me that I was no longer permitted to come on "his" property. I told him that I had grown up on this property, had spent an important part of my life on this property, and he was not going to be the one to stop me from being here.

So a few weeks later, I received a hand written letter of intent to sue signed by a very shaky hand, the matriarch of the family, who did not have all her marbles straight by that time, I'm afraid. After that, I would deliberately walk along the edge of the property, going down to the river by the adjoining municipal park, then wading in the water (the river bottom, up to the high water mark, belonged to the provincial wildlife preserve), all along the property, then climb back up the other side. The matriarch, who usually was never seen outside the house, often came out to see what I was up to and make sure I did not walk on the wrong side of the property line. I still don't know what crazy story they told her to make her do that.

When the daughter, and her husband and their kids finally moved out once her mother had passed, the house was put up for sale and surprisingly, the part of the property along the river was bequeathed to Nature Conservancy! 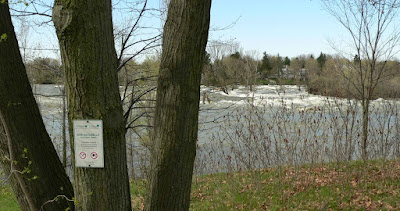 Posted by Amie du Richelieu at 9:59 AM