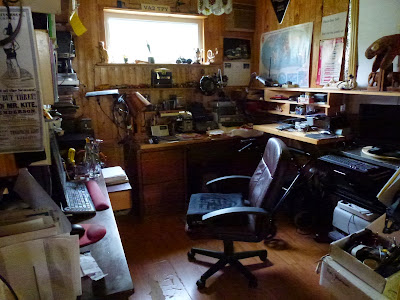 Photo:The state of study when I re-took possession of it.

These days, when the weather is not nice enough to play outside and all my chores are done, I go work on the spare bedroom that I use as a study. It is in the North corner of the house.

It is the last room of the main floor of my home that has not been renovated/finished. When I bought the house in 1979, the owner/widow used it as her own bedroom. It had only one window looking out on the backyard. The first thing I did when I bought the house was to have the washer/dryer brought up from the unfinished basement into that room It was now my sewing/mending/ironing laundry room. I hang out must of my laundry on the clothesline outside, so that set-up for the laundry room made much more sense: the access to the backyard was much easier. I intended to take the 2 other small bedrooms and make one large master bedroom out of them, which I did later on.

Then in 1985, T moved in. That back room then became his computer room, even though the washer/dryer stayed put. It was far from being an ideal situation. He put in an awning window in the upper half of the wall on the side of the house so he could have cross-ventilation, insulated and covered with beadboard parts of the walls, covered part of the floors with laminated wood flooring and left a hole in the ceiling where he checked the electrical wiring. He then proceeded to fill up the room to the max.

In 2013, when I had the bathroom extended in the back of the house, including a nice designated laundry room, the back window of that spare room became closed in. I asked the men who did the work to leave the opening as is after removing the window: I already had this idea of making that hole in the wall a false window, putting in white LED lights and covering the opening with a frosted sheet of plastic to diffuse the light nicely.

And so now, when it`s raining outside (like right now), I go work in there. There is already 2 coats of white paint in the "false window" so that light be reflected as much as possible. Another coat will be necessary. Next step will be to put in a string of LED lights. I want to stop there for now, because I want to paint the ceiling white - again to reflect as much light as possible. So I have to figure out what to do with that hole in the ceiling. And so on, and so on....

I have already figured out the final lay-out of the furniture in there, after finding solutions to finish the walls and floor. So I`m looking forward do having that room done also. I love my home!
Posted by Amie du Richelieu at 3:01 PM